This is a wonderful season to reflect and be thankful. In our ambition to find that next entrepreneur to invest, be part of an amazing portfolio exit all while solving the world’s energy problems, it is easy to overlook, ignore, and avoid what really matters.

Thank you to all of those that have supported me to chase my dreams, investors who have supported my ideas, employees that have placed their faith in my ability to grow their future, and fellow entrepreneurs that continue to push what is possible giving all of us inspiration and hope.

I am thankful for being part of a company that is setting the energy transition pace while inviting the other stakeholders to join us. I am thankful to all of the entrepreneurs that I have met and wish you success. I am thankful to my other colleagues (fellow investors, experts, scientists, engineers, customers, suppliers, bankers) that are part of this amazing industry. Enjoy the final days of 2019.

I am starting a series of notes that discuss the latest changes in VC deal terms and how it applies to your startup. First, read my note on whether venture capital works in energy and then read away. This is the kickoff note focused on the concerning trend of valuations.

Over-Valuation and the Death Spiral

This is a golden era for venture capital. So far this year “$57.5 billion has been invested in US VC-backed companies. That’s higher than in six of the past 10 full years and is on pace to surpass $100 billion in deal value for the first time since the dot-com bubble.” This has made way for fundraising at breakneck speeds for VCs. The new venture capital deal terms have seen a rise in deal values for businesses with unicorn ($1+ billion) valuations (which is unheard of proportions for venture capitalism). Are these companies really worth this much or is the supply of funding driving these valuations?

Is the current rise in VC-backed companies a success — or excess?

Prominent investor Brad Feld sat down with TechCrunch’s Connie Loizos to discuss the latest edition of his book and hot-button issues on VC deals (a must-read book in my opinion). In that interview, he said, “The recent phenomena for early-stage investors have created a mismatch at certain stages.” He believes VC deal term changes have created a complex system. I will write more about these changes to help you navigate.

The most important thing to remember as an entrepreneur is to take control over your financing. In other words, you should always be in a position where there is more demand from investors wanting to buy stock in your own company than there is actual supply (availability) of shares.

Brad Feld recommends that an entrepreneur should raise just enough money to get to the next key milestone. And I agree 100%. Unfortunately, there is so much capital available (maybe not as much in energy), entrepreneurs are being lured into the danger zone of the death spiral: raising too much equity –> forcing your valuation to be higher than it should be –> creating false expectations for growth –> fueling the need for more capital –> repeat. Don’t let this happen to you. The exit multiples in energy are not there to justify this supply-driven economy.

In a recent Pitchbook research report, “Pitchbook 3Q 2019 Analyst Note: The Emergence of Pre-Seed”, it shows that since 2012, the number of seed deals per annum has been relatively consistent; however, the valuation of each deal has grown dramatically. The median seed deal size is now $2.1 million, compared with $1.0 million in 2015 and just $520,000 in 2009.

Has anyone noticed that the costs for starting a company have dramatically fallen while the valuations have gone up considerably? Yes, software is “eating the world“; however, the logic does not make sense that it costs much less to create an asset but that asset is a lot more valuable. Hmmm… For seed investing, we are seeing tons of supply. But the number of startups that actually succeed is still in the single digits.

As an entrepreneur, you need to be very careful about taking too much money and allowing the value of your company to be set beyond logical boundaries.

For example, the electric scooter startup Bird has generated a lot of buzz during its less than a three-year journey. In fact, they’re valued at $2.3 billion, up from $60 million in February 2018. As a result, there has been a skyrocketing interest in micro-mobility. However, there has been stiff competition in many cities leaving many investors undecided on their next investment into micro-mobility. Even Bird is feeling the money crunch — running low on cash, Bird is seeking another $300 million from VC investors. I witnessed a similar trend in China’s micro-mobility investment gamble turned sideways. Deals like these have many people questioning the venture capital that’s also backing Facebook and Twitter, as well as the impact it will have on the economy.

Are investors investing massive amounts of money in passing phenomena?

According to Brad Feld, startups going out of business is part of the cycle. VCs must plan against it and entrepreneurs must learn how to configure their capital into the problem. And remember entrepreneurs, there is reputation risk for failure.

Take Uber, for example, one of the world’s most valuable VC-backed companies. Their estimated valuation is $62 billion, but they’re losing between $500 million and $1.5 billion per quarter. They have been on a run-rate since early 2017. At the same time, they still raised $1.25 billion early this year led by SoftBank. Their valuation is holding over $60 billion, despite scandal, foreign competition, and crisis within their core business. Compared to Tesla, their pursuit of breakneck growth also has them burning through cash to reach their desired scale and capture market share.

How Can VC-Backed Companies Like Uber Impact the Economy?

Unfortunately, money-losing companies can continue to operate longer and undercut incumbents far longer than before. VCs reward growth metrics with higher valuations. But it’s arguably these firms that are destroying economic value.

The change in VCs driving these astronomical valuations built on an investment thesis that has no profitability in sight has social consequences. Businesses like Uber are destroying social value, and they’re devaluing labor, including work in the enterprise. Please take a hard look and ask yourself whether Uber has created or destroyed value overall.

Since the modern age of venture capital, the wealth associated with the big tech exits has been limited to only a select few in Silicon Valley and its backers (that is, institutional funds and accredited investors). If a company does not create a lot of public value creation, is it a success? See my chart below and let me know your thoughts. I am not sure I have completely thought through this; however, it deserves another conversation. 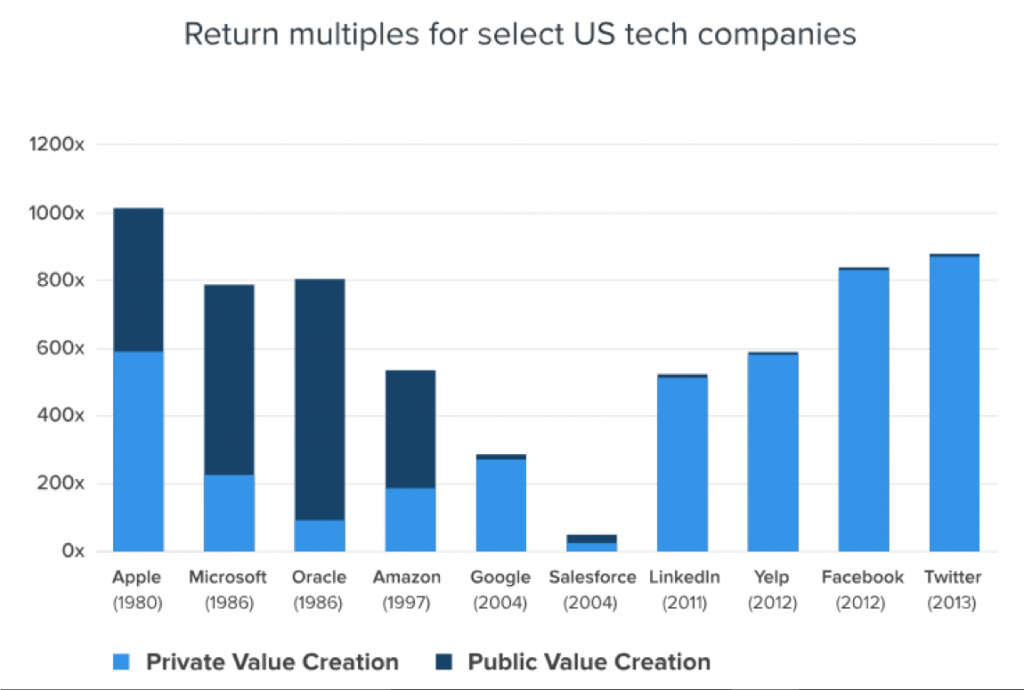 If VC investors were held to the same terms as public investors, the public market would have an opportunity to shed light on questionable investment deals. Clearly, if you look at the large VC-led tech exits since 2011, the public markets have not been kind. My point is that it is up to you (as a follow-on investor) and an entrepreneur to take control over the death spiral. If you make it out with a big exit, good for you, but did you create value over the long run?

Over-valuation is a mirage and is destroying capital. Do not let it destroy your startup.

What Does the Change in VC Deal Terms Mean for Energy?

Venture capital is surging back into the energy sector. Although many investors have initially abandoned clean energy, many are now back on board and a few of us have been here the whole time. In fact, the venture capital being put into clean energy is not all billionaires and oil tycoons. Matthew Nordan, Prime Impact Fund’s director, believes energy technologies are not a good venture capital investment. Why? Because energy technologies take longer, cost more, face more risk, and return less than, say, a new drug.

According to Bloomberg New Energy Finance, the overall investment for clean energy dropped 8 percent in 2018, but venture capital has surged 127 percent to reach $9.2 billion, attaining its highest level since 2010. The new investors are coming into the clean energy investment at their own pace, while others are creating a secondary motivation to their capital with a return that’s not purely financial (uh oh! social irresponsibility?).

According to Forbes, new investors include:

These investors are providing a capital source that has an appropriate level of mission alignment. And many can accommodate long time frames that are well suited for funding clean energy startups.

The worry over global climate change has allowed more corporations and private investors to back “green” deals. Global carbon emissions have intensified, and many investors feel like there isn’t enough time to reverse the impact that has on life on earth. So, many investors have stepped up their commitment to startups in the clean energy sector. Sustainability jumped to a record $9.2 billion as of 2018.

If the clean energy sector is looking for VCs to back their efforts, now is a good time, right? While estimates for the cost of climate change are all over the board (even up to $500B+ per year), the lack of consistent regulatory understanding has made it challenging for many investors to allocate capital.

The same disturbing trend we are seeing in general tech venture capital has moved into new energy: a lot of capital –> raising too much equity –> forcing your valuation to be higher than it should be –> creating false expectations for growth –> fueling the need for more capital –> repeat.

If you are an entrepreneur, take Brad Feld’s advice: (1) raise just enough money to get to the next key milestone (2) be smart about your valuation (take a demand-sided approach vs. supply-sided), and (3) have more demand for your equity than there is supply.

If you are an investor, do not take part in the death spiral (unless you get in early and leave early…we may still argue that overall value was not created, but what will you care? Your track record will say otherwise).

I read this excerpt from Bad Feld and it hit a soft spot: “When I started investing in the mid-90s after having been an entrepreneur, one of the hardest things that I wrestled with as an entrepreneur, now investor, that I watched over and over again — it just may be absolutely batshit crazy — was the inability of VCs to tell entrepreneurs, “I’m not interested.” Even to this day, people say to me, “Well, how do you say no to people without giving up your future ability to have interactions with them or giving up your option value of interacting with them or offending them?” The answer is like, “Hey, what you’re doing is neat but it’s not for me.” Or, “It’s interesting what you’re doing but I’m not interested.” Or simply when somebody asks you a yes-or-no question, be polite, engage with them, but say, “No,” or, “I’m not interested,” just as an example.”

For those entrepreneurs that have felt strung along by me or someone on my team, I am sorry. I look forward to speaking with you in 2020 and will take a much more #jomo approach.

The Art of Smart Manufacturing: Experts Weigh In on the Digital Transformation of Factories